3 things I learned about Marketing from the Renaissance Festival

I am fascinated by real world marketing in action, and I’m especially keen to tactics that worked on me personally, because I’m a shrewd consumer. (Some might say cheap.)

So here you go. These are my observations from our excursion to the Middle Ages.

1) Give a discount that’s small enough to instigate the transaction, but not so big you compromise your worth

I was surfing online and saw an ad about our local Renaissance Festival.

“Kids enter free if they wear a paper hat on Pirate Day”.

Give a discount that's small enough to instigate the transaction, but not so big you compromise your worth.Click To Tweet
I followed the link and saw the listings for days, times, and rates, but most importantly, right there, front and center, was a big button that read “Learn how to make a paper hat”.

I clicked the button and thought, “Huh? paper hats. This could be something fun to do with the boys” so I downloaded and printed the instructions. Now mind you, at this time, I had no intention of going to the festival, but craft time with the boys – great idea. 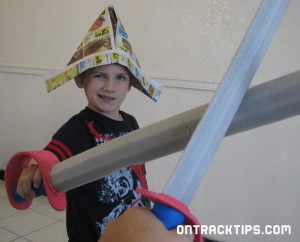 We set the table up and began our family fun activity. About halfway through my son asked, “Dad, why are we making these hats?”

“Too bad we don’t have a pirate ship and swords too” my son added. “Dad this is so fun! we need to find a pirate ship”

“Yeah. A big pirate ship with lots of pirates, and cannons, and treasure” Boy! Was he getting all fired up over pirates.

“Well how about a pirate village?” I asked calmly, “will that work?”

And with a resounding “Yeah! Pirate village” from the boys, the Renaissance Festival was a done deal.

I absolutely love this image. Here’s Hob the Troll and he’s singing on the bridge. Lots of people are standing around listening. And what’s really funny is that his singing was horrible! I mean it was really bad, but that was just a part of the act. The real act was the donation boxes in front of him.

When someone place a dollar into the “Keep Singing” box, he began singing, wailing, howling, and making these terrible and hilarious noises. When someone paid the “hush money” (which really was the better investment) he’d stop.

My boys had so much fun, I thought, “Well, I gotta give this guy something” So I threw a dollar in each box. And without realizing it and rather by accident, the last box I donated to was the hush money, and Hob stopped.

Everyone in the crowd said, “Awww..” all disappointed that I ruined their fun. Ok, so now I feel like a total heel. Immediately this little kid turns to his dad and said, “Daddy make him sing!” and of course Dad dropped a bill into “Keep Singing” and wound up ole’ Hob.

The crowd laughed, some playfully sighed and rolled their eyes, and everyone was having a lot of fun. But that’s not all.

Give Consumers Options in such a way that both A and B result in a sale.Click To Tweet
Right after my contribution to the act, two guys, started a little war. The first guy shouted, “Oh! man. I can’t take it anymore, make it stop!” covering his ears and letting everyone know that Hob’s songs were absolute torture (which they kind of were); his buddy on the other hand insisting on making him sing.

So, one after the other, they stood over the boxes, and began peeling off bills and letting them fall in a battle of stubborn will.

Everyone was cracking up at the donation tug-of-war between these two buddies and the whole time, poor ole’ Hob, he’s stuck in the middle singing, stopping, singing, stopping. And this went on for at least a minute or so. The whole crowd was having a total blast.

But I tell you what, the guy that had the most fun was poor old Hob, who in a little over 5 minutes, was about $30 richer.

There was a ladder climb game where you had to climb to the top of a suspended rope ladder and ring a bell. If you did, you won a prize. One try was 1$ or three tries for 2$. Of course you can image which option everyone choose.

Well the attraction right next to him was a guy that had two big logs, elevated over a pile of straw. The object was to have two people get onto the log, and see who could wrestle the other one off first. His rate was 5$ flat rate per try.

And both attractions were right next to each other, AND right next to the beer tent. So you can image the crowd of drinking buddies wanting to best each other in these renaissance games.

Curiously though, the guy with the rope game had a huge line of people waiting. The guy with logs didn’t sell one single ticket the whole time we stood there. And we waited for our turn which was a good 10 minutes, anyway. I saw a lot of guys walk over and talk to the log game barker, including myself, but no sales. Why?

Well, here’s what I would’ve done. I would have priced my log game a little lower, say 3$ for one try, and I would have given a perceived value proposition of 1 try for 3$ or 3 tries for 5$.

He was in the perfect position, with the perfect target market, with a great product, but his pricing had no value. I even went over to him and asked him, “Why don’t you change your rates a little so you can get some people on your ride?”

Oh, he was a bit cross, and proudly responded, “I don’t lower my rates. Everyone tries to get a deal from me, but that’s bad business. I know my ride is worth 5 bucks”

There are ways you can give a deal without lowering your rate.Click To Tweet
That’s exactly why you need to poll your market and listen to their needs. If everyone is looking for a deal, give it to them! In this case, he would have still been selling tickets at $5, but the $3 option all of a sudden makes the 5 dollar option look a whole lot more attractive.

So there you have it. My three marketing tips I learned from our trip to the land of kings, and trolls.

What do you think? I bet you want meet Hob the Troll, don’t you!

Stay on Track and never miss an update.

This site uses Akismet to reduce spam. Learn how your comment data is processed.

Get On Track Tips

Stay On Track and never miss an update.

“ Jason took my paltry efforts to build a non-profit website and turned it into a dynamic work of art.